from Book of ZOO by David Rosane & The Zookeepers 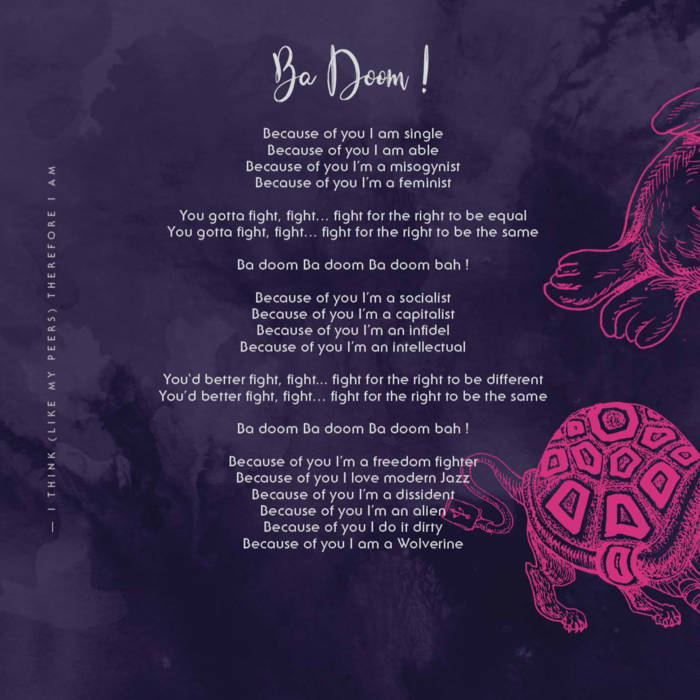 
About:
Once asked about some existential enigma Desmond Tutu famously retorted that the secret of existence is not being - but BELONGING...Little did he know how much modern science agrees with him, but for totally different reasons. Humans, we now know, are social primates that find existential value in subscribing to the views of the group. The Party Line. We wear our opinions like identity badges. Our loyalty to the tribe, in what we think and say publicly - for fear of ostracism, no doubt, have defined group behavior and infra group dynamics (tribalism, religious wars, politics...) for most of our existence. Call it our inner sheep. Bah!

The problem with this is that it constitutes a major hurdle to reason, knowledge & progress. You cannot think straight (and speak your mind) if your conclusions get you kicked out of the academy. Or burned at the stake. Take science denial, the idea that climate change is a hoax (on the Right), or that GMO's and Vaccines will get us all killed (on the Left). Irrational, conspiratorial views survive on all sides of the political spectrum, because of this antiquated, evolutionary proclivity towards group-think. People cling to their clan's orthodoxy. Solidarity oblige. God forbid we might think, speak and act independently! Even scientists have a hard time doing so. No, instead we cherry pick our facts to best suit the ideology or economic aspirations of the group (or institution, or team) to which we belong (or the company we work for), often without being an expert on anything. But its more reflexive than it is conscious. Especially among people on the far authoritarian ends of the political spectrum - where the prefrontal cortex of the human brain ceases to function altogether.

Tribalism also pops up in Music, of course. I listen to this, I'm cool. You listen to that, you're a (insert expletive of choice here) traitor.

A multinational collective of musical heavy hitters in full flagrant creative collaboration with Post-Punk Power and Protest rocker David Rosane, who also has a gentle side. Dave used to work as a full-time native american activist and field biologist in South America. Core members of the Zookeepers are Don Sinclair & Jennifer Grossi of Bradford, VT., community activists and music teachers by day. ... more

Bandcamp Daily  your guide to the world of Bandcamp